Hey hey everyone, How are you doing? Hope you are safe and well. Today is the release of Halloween themed products from Taylored Expressions. 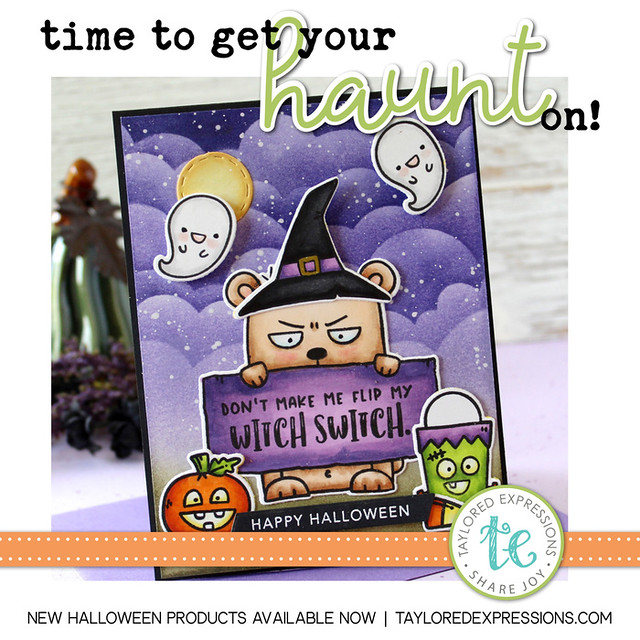 All the new products are available for purchase at TE store now. I am so excited to share my projects using the new products. I have three of them. So here we go – Project #1 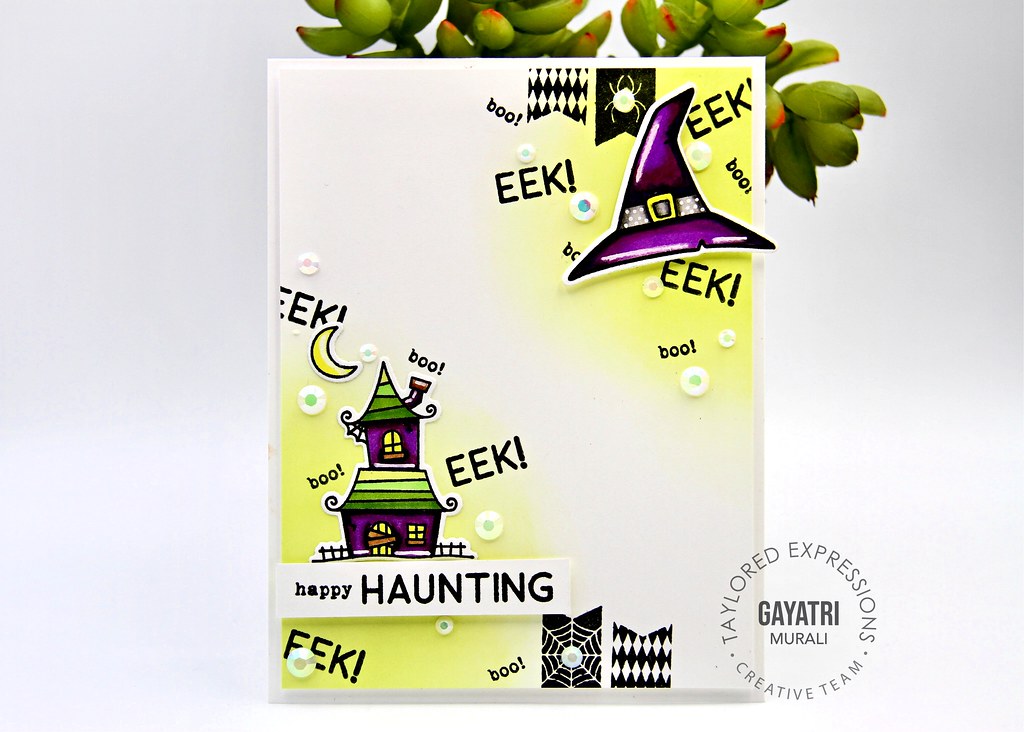 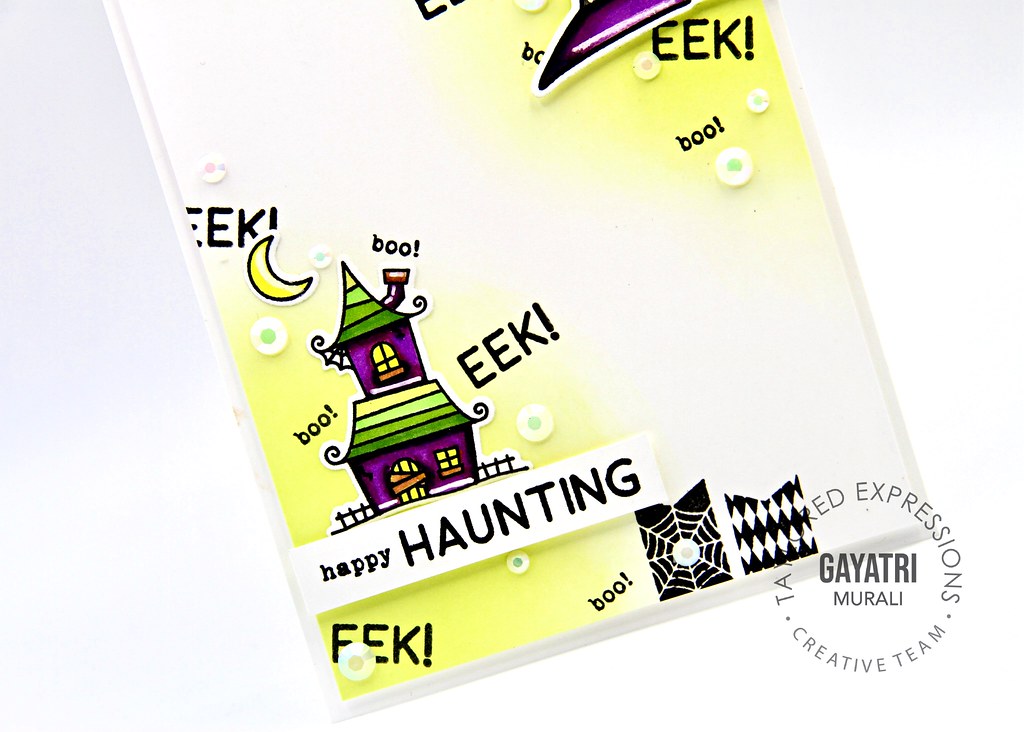 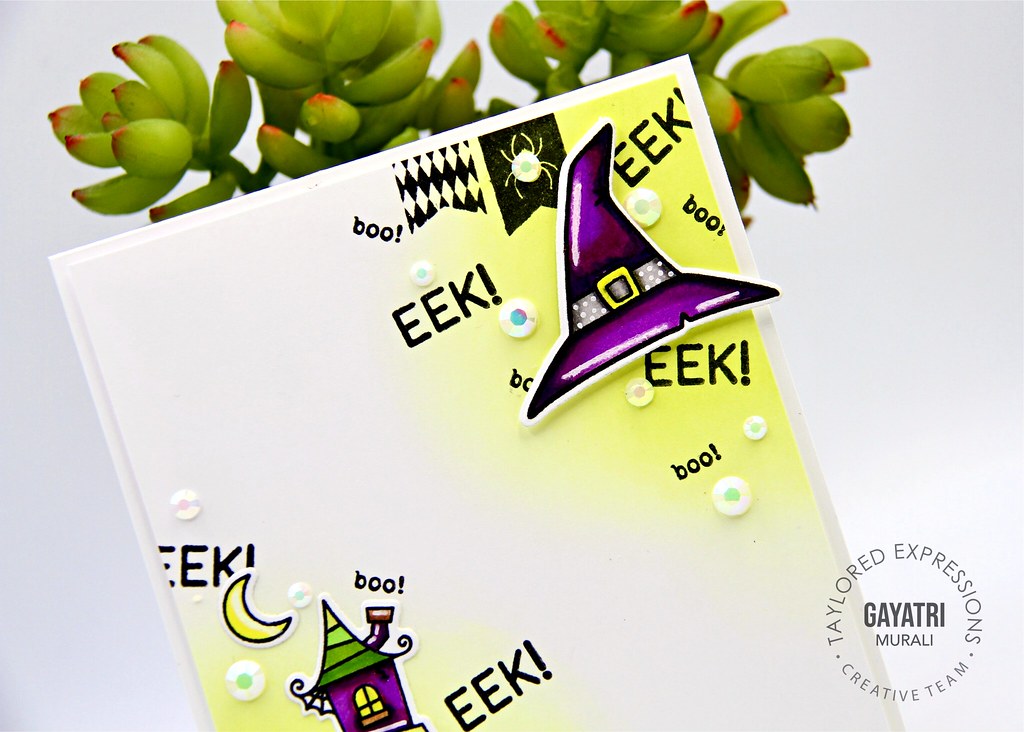 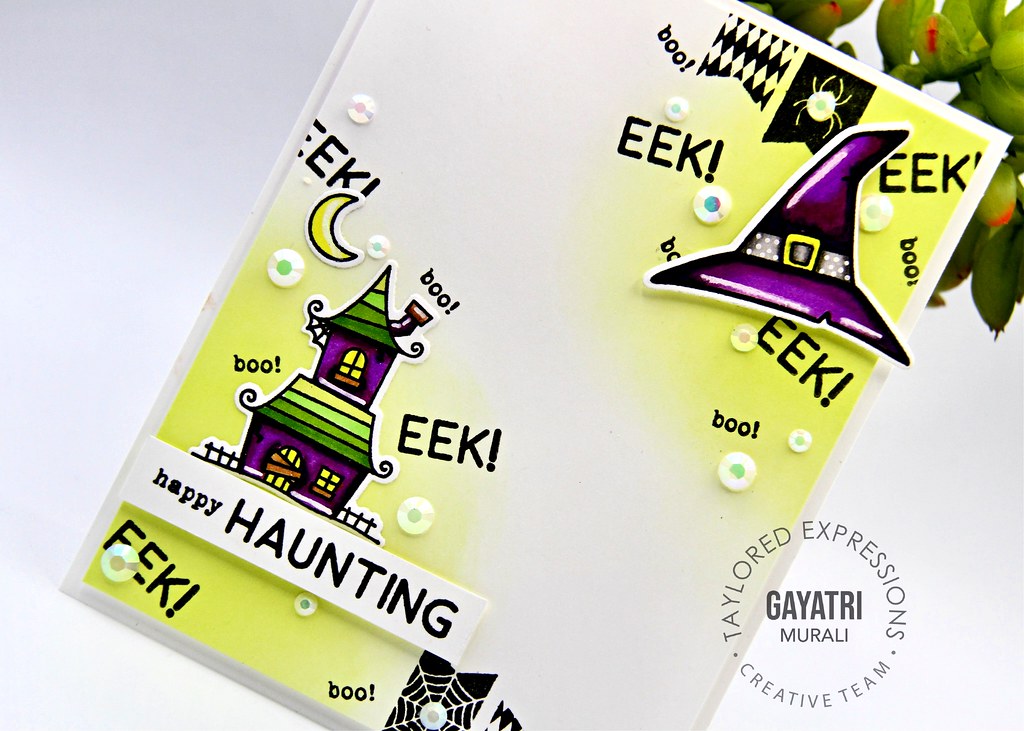 On this card, I used the new Pennant Parade Halloween stamp set along with the new Spooktacular and Big Grumpy Halloween stamp sets and coordinating dies. I went in for a fun whimsical kind of layout. I love this layout especially for halloween themed products as there are so many elements and words that can be used to give the whimsical touch. 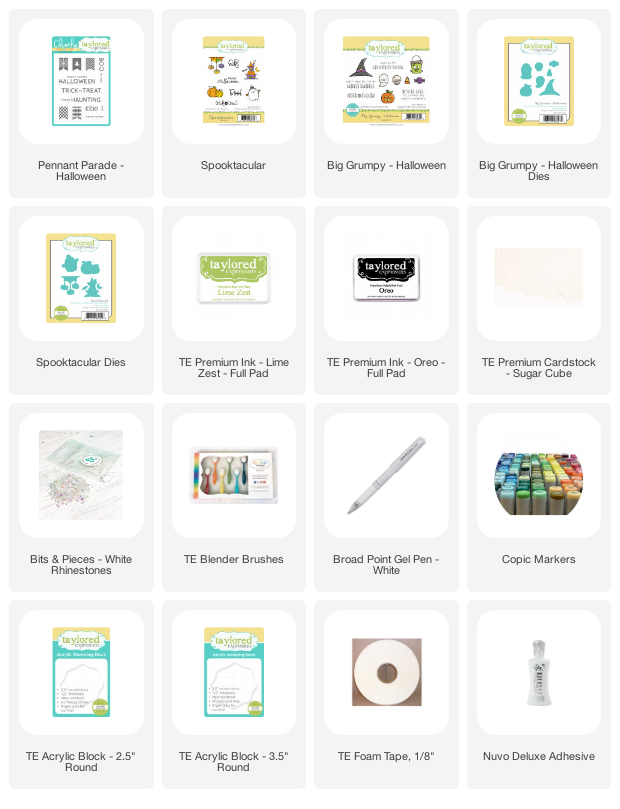 Next project is a mini slim card using the new Mini Slim Spiderweb stencil along with Big Grumpy Halloween and Handlettered Sentiments Halloween stamp set and coordinating dies. I really love how bright and fun this card turned out inspite of it being halloween themed. 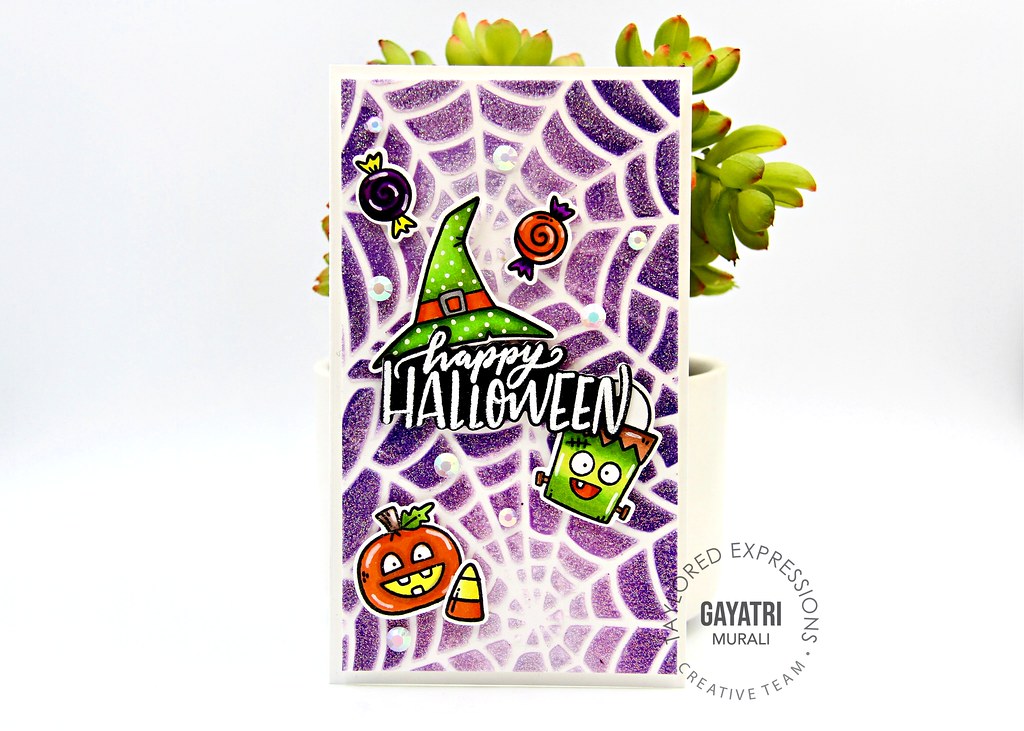 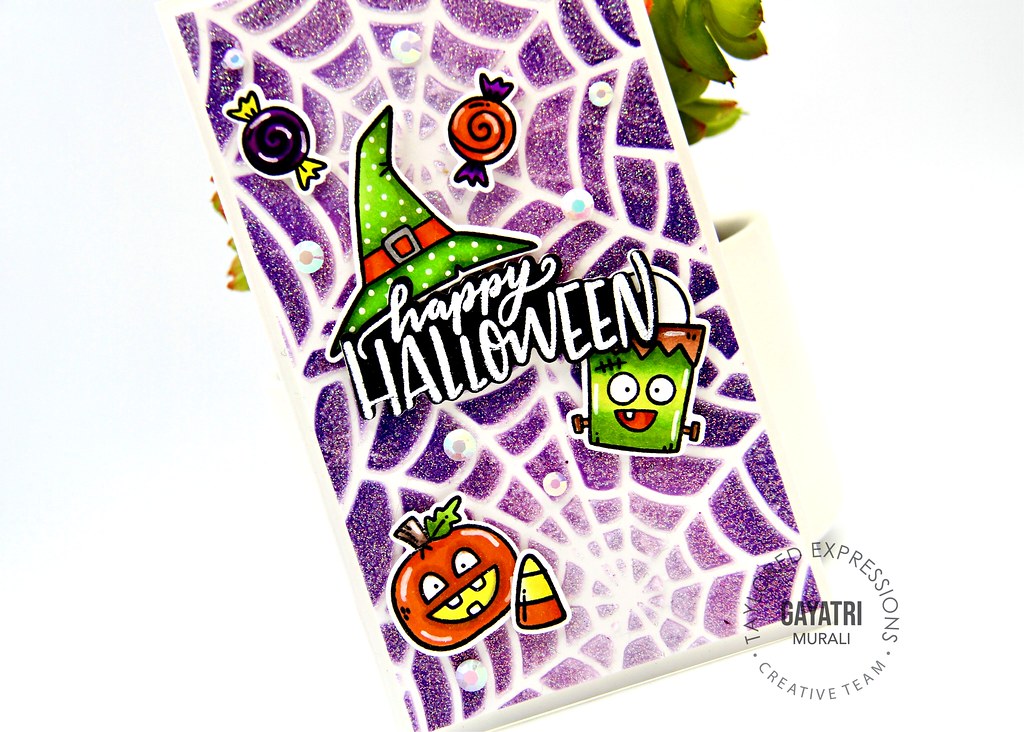 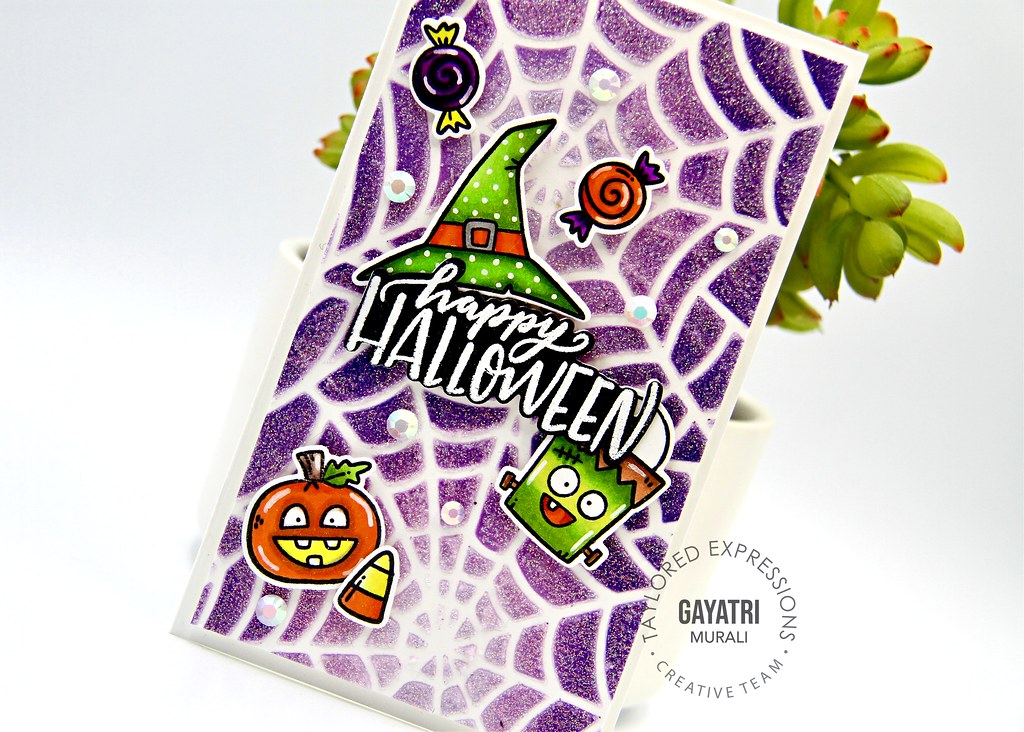 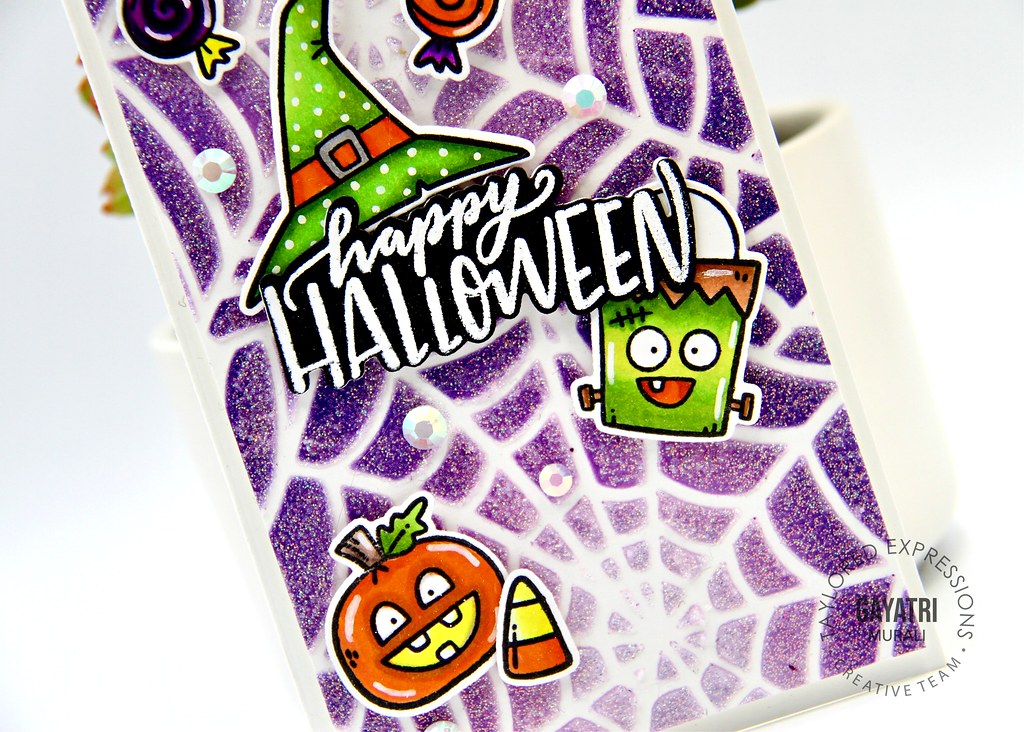 I stamped and coloured the images from Big Grumpy stamp set using copic markers and die cut using the coordinating dies. Then I used the Mini Slim Spiderweb stencils on Sugar Cube cardstock panel and sponged the Lavender Glaze, Jelly Donut and Eggplant Te dye inks followed by Nuvo Moonshine glimmer paste. Once dry, I trimmed the panel and adhered to the Mini Slim card base.

I love how bright sparkly yet halloween the card looks. 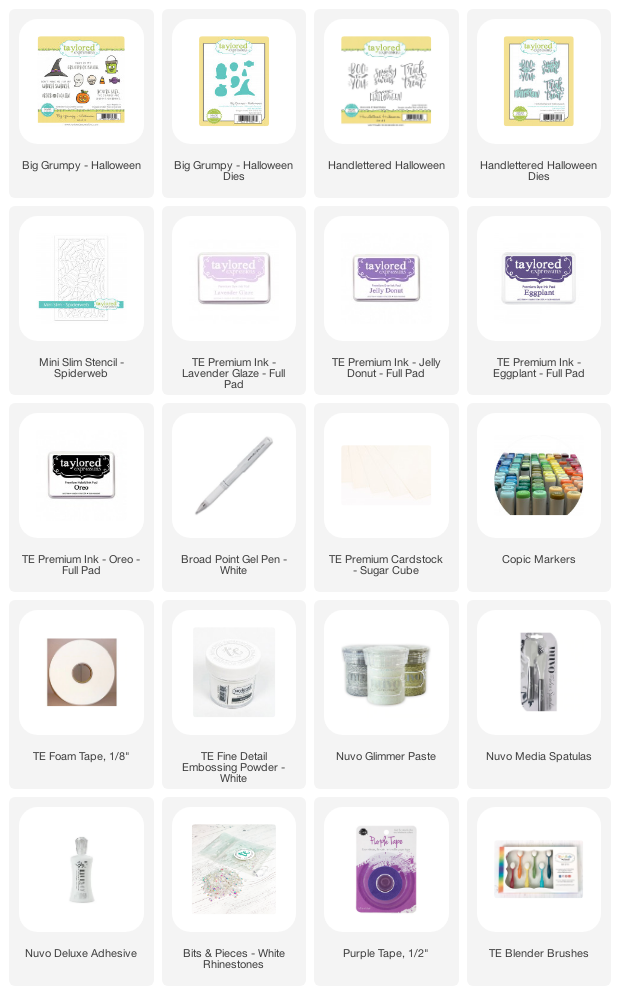 To the final project. I have a trifold mini slim halloween card using several new products. This card is truly grungy halloween in nature 🙂 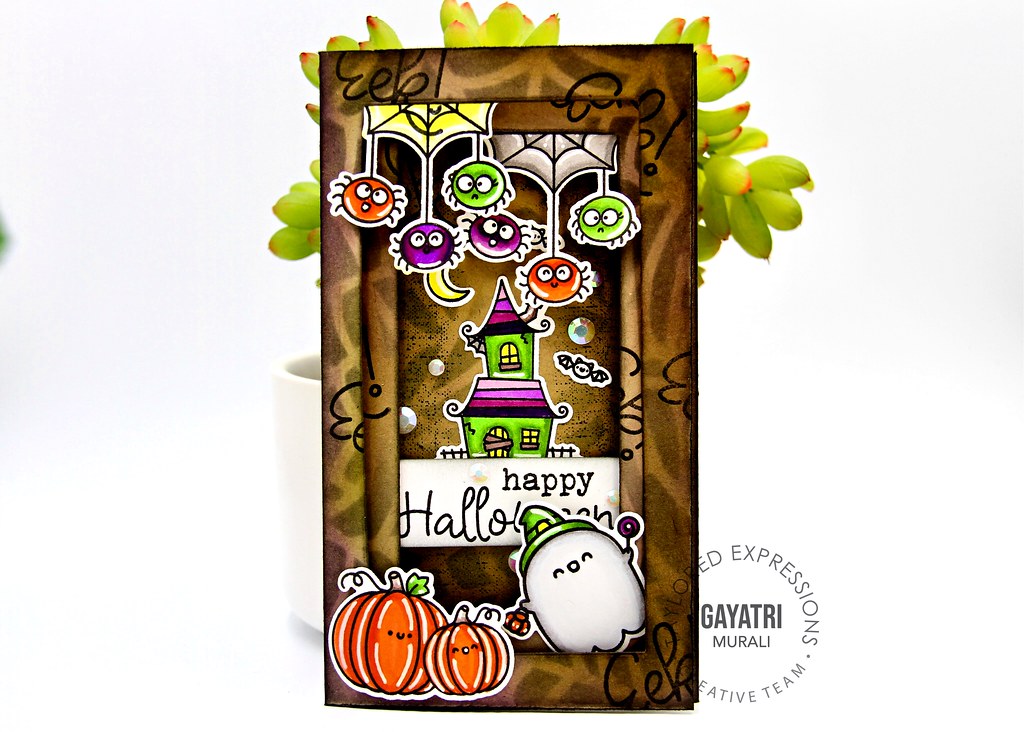 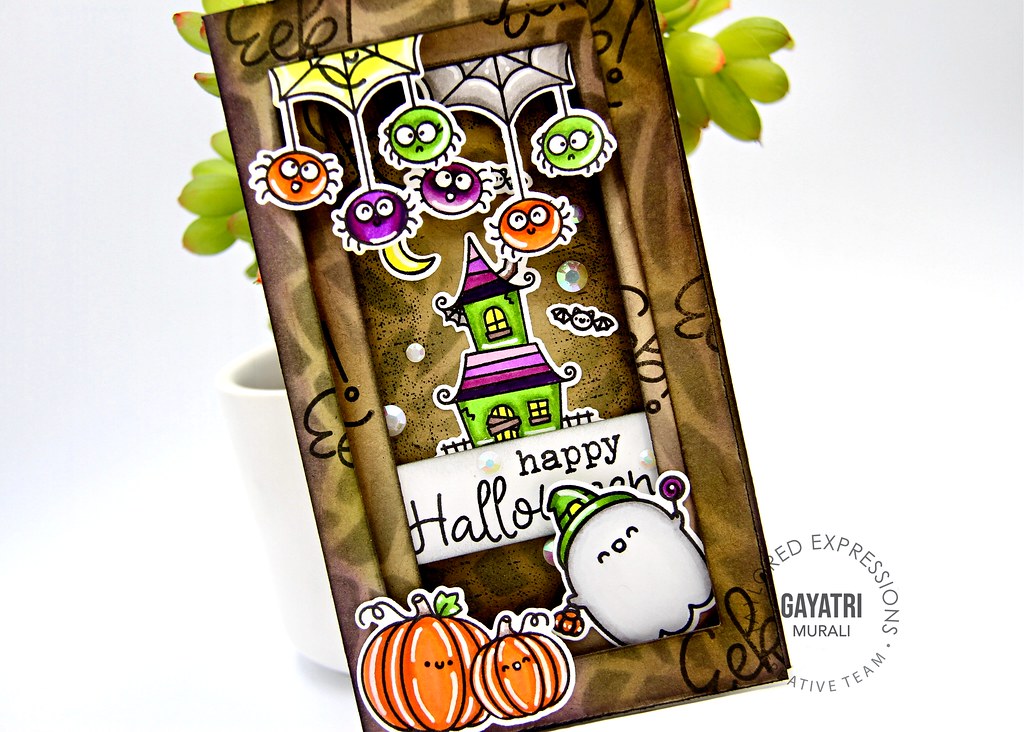 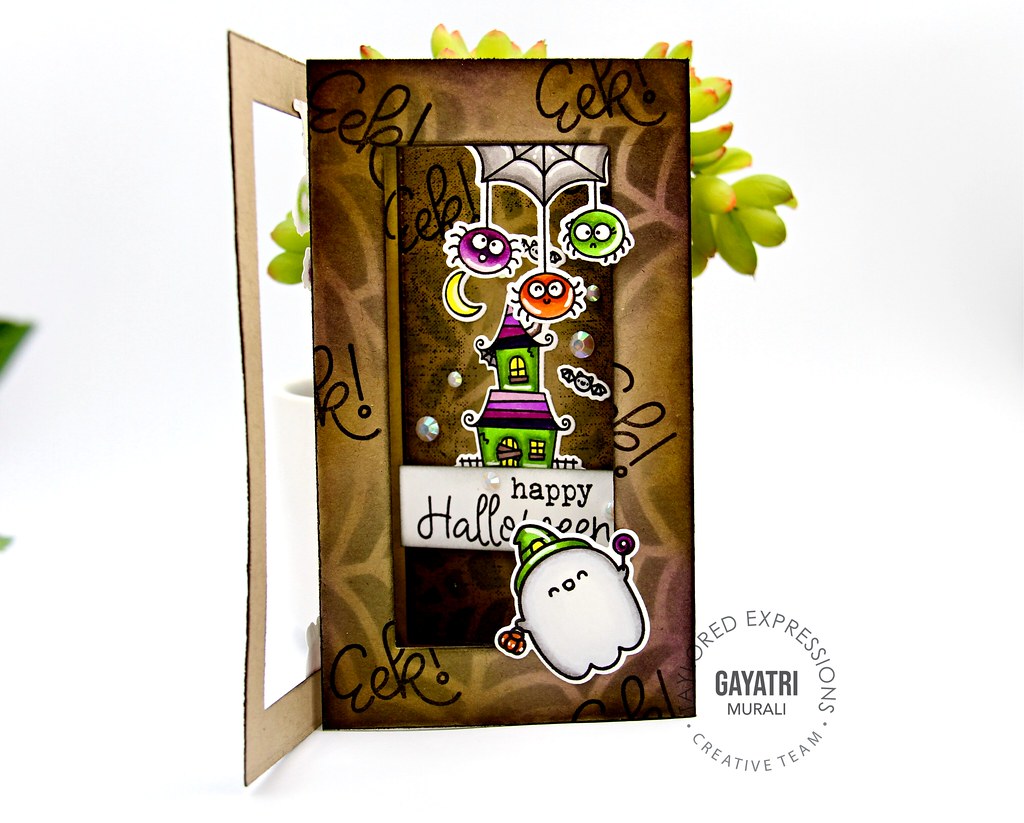 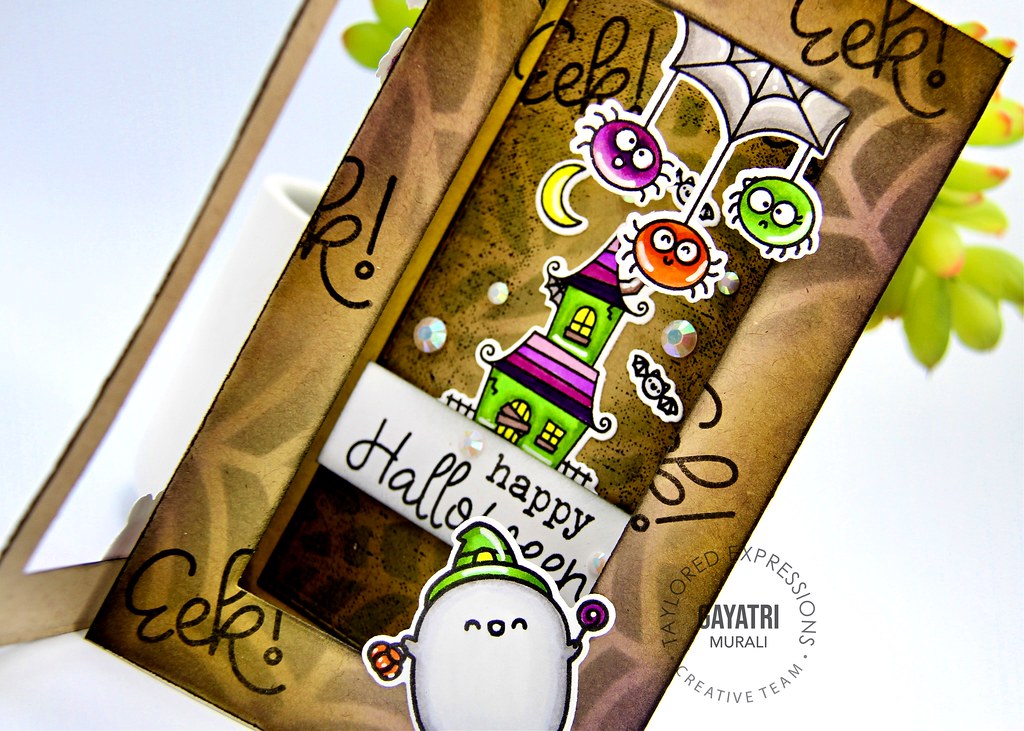 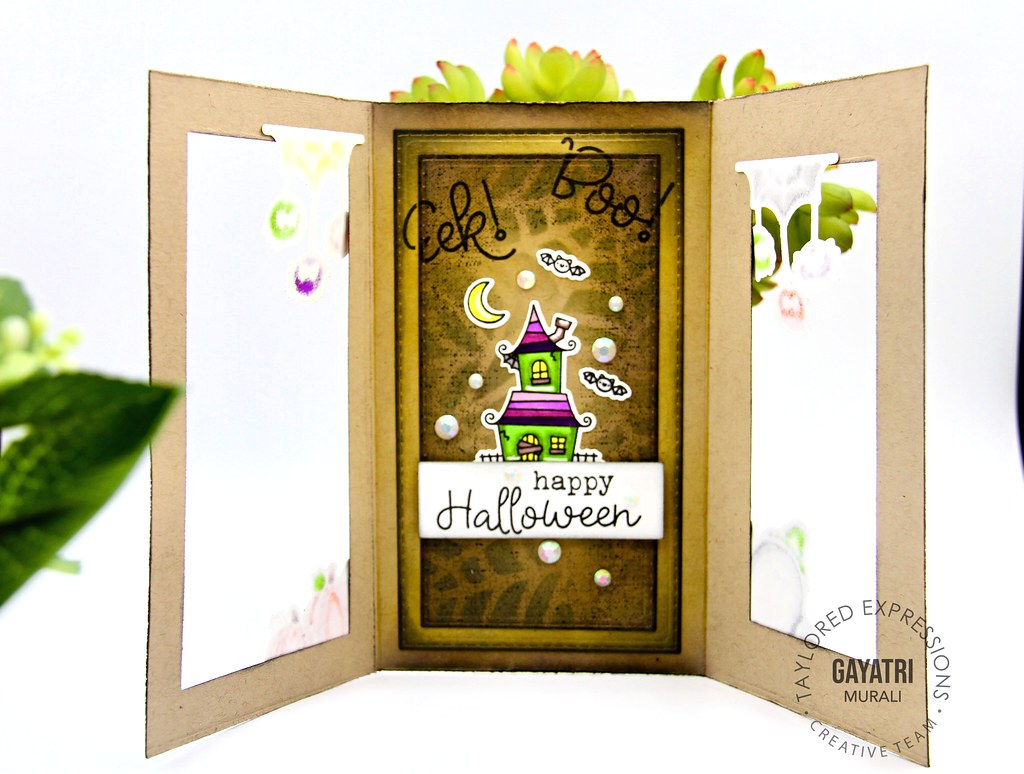 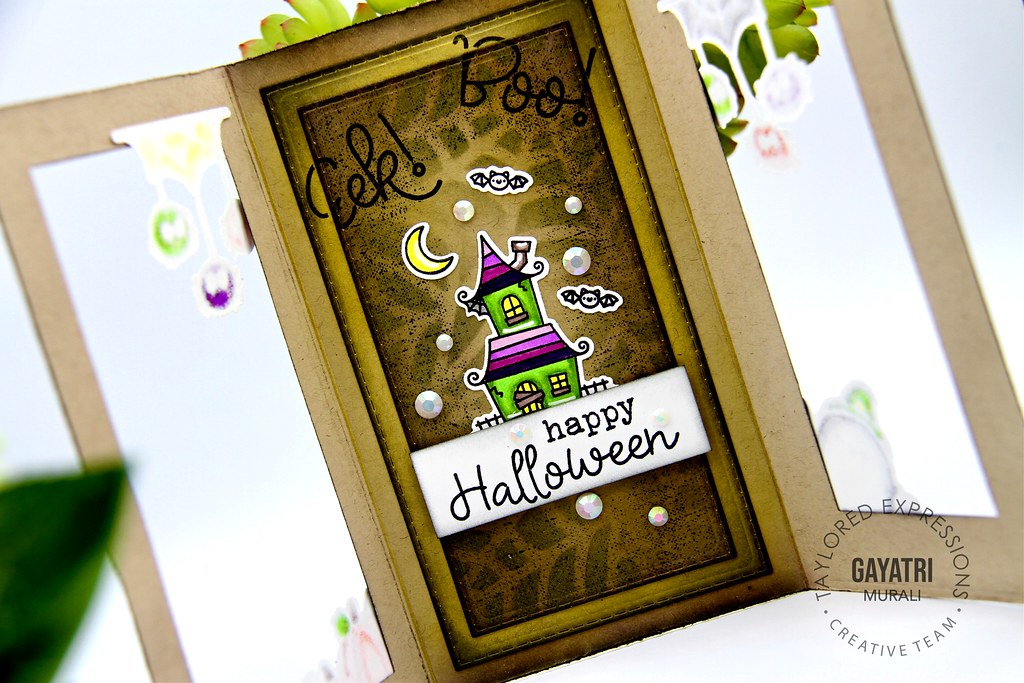 So I again started again with stamping and colouring the images from Spooktacular stamp set. Then using the coordianting dies, I die cut them all out.

Then I used the trifold card in Toffee for the card base. I added colour and texture on the card using Mini Slim Spiderweb stencil and Te dye inks in Lime Zest and Eggplant. I added this to the first two opening of the trifold card. Next using the Stitched Mini Slim Stacklet dies, I die cut out the front two panels to create windows. On the first card front, I used the larger die and the next smaller die on the next card front. Then I stamped the words from the stamp set over the two folds.

For the inside of the card, I used two of the Stitched Mini Slim Stacklet panels in Toffee. I sponged the inside of the trifold card, with Lime Zest and Oreo inks on the edges, similarly on the largest panel as well. I adhered the largest panel on the inside. The second panel, I stamped with the new Linen background on the edges leaving the middle clear. I also used the Mini Slim Spiderweb stencil to add the spiderweb detail using LimeZest TE dye ink. I then sponged the edges with Jelly Donut and Oreo inks.

I adhered the halloween elements from the Spooketacular stamp set previously coloured and diecut, on the centre of the panel before adhering the panel on the inside of the card. Similarly, the rest of the die cuts I used on the first and second window folds of the trifold card. Again a few white rhinestones to finish off the card. 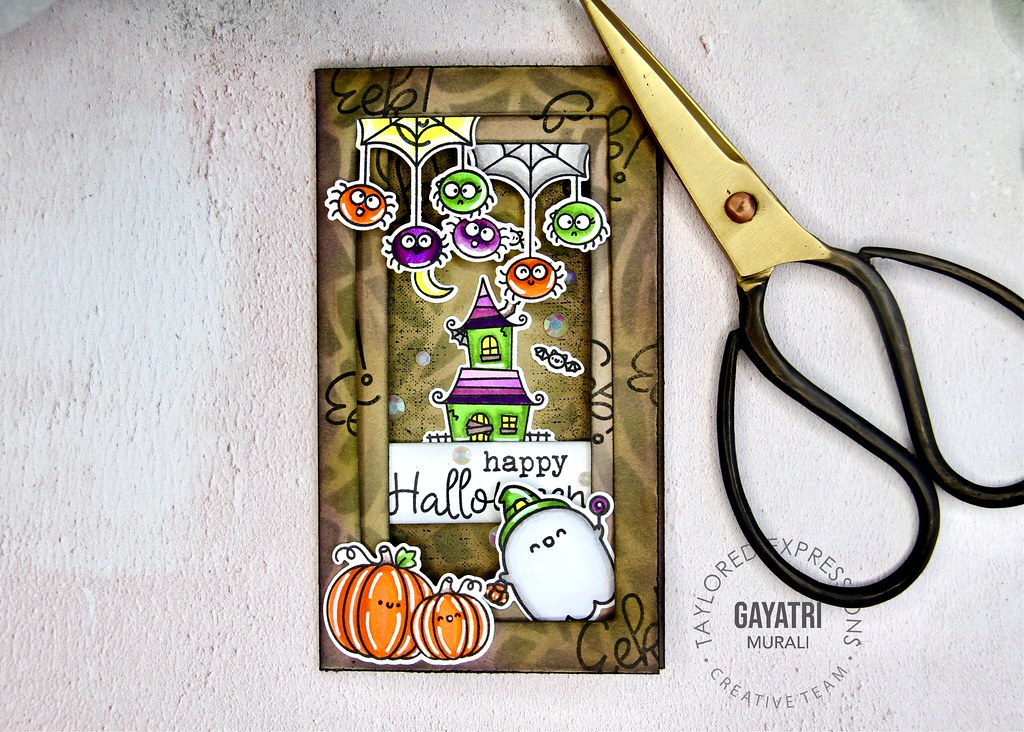 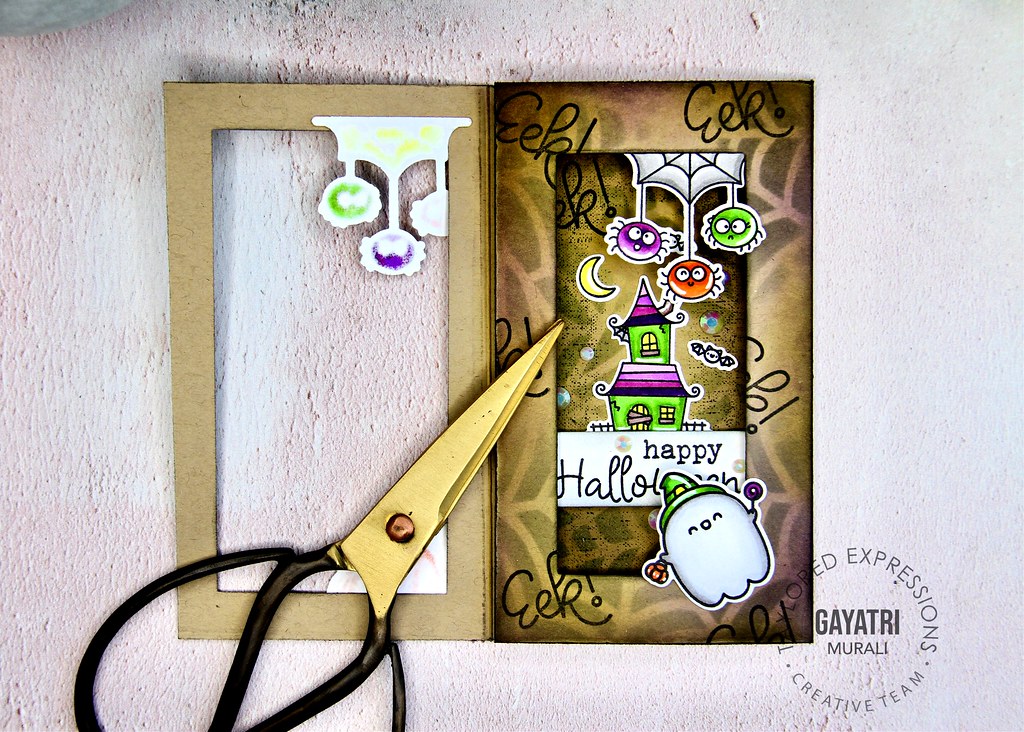 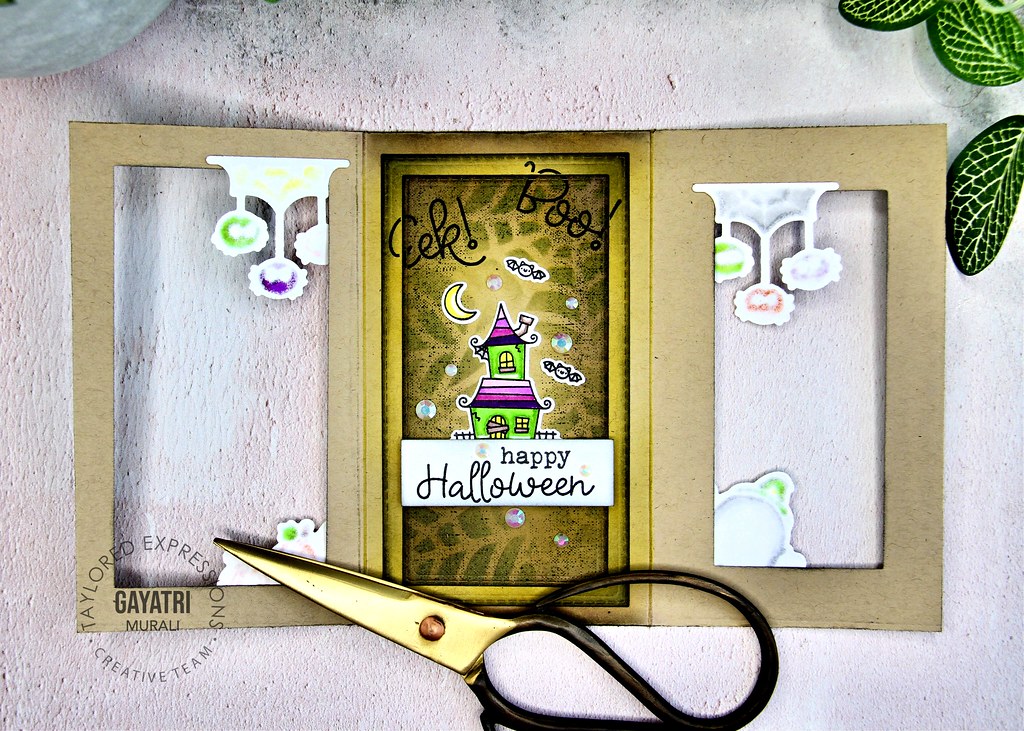 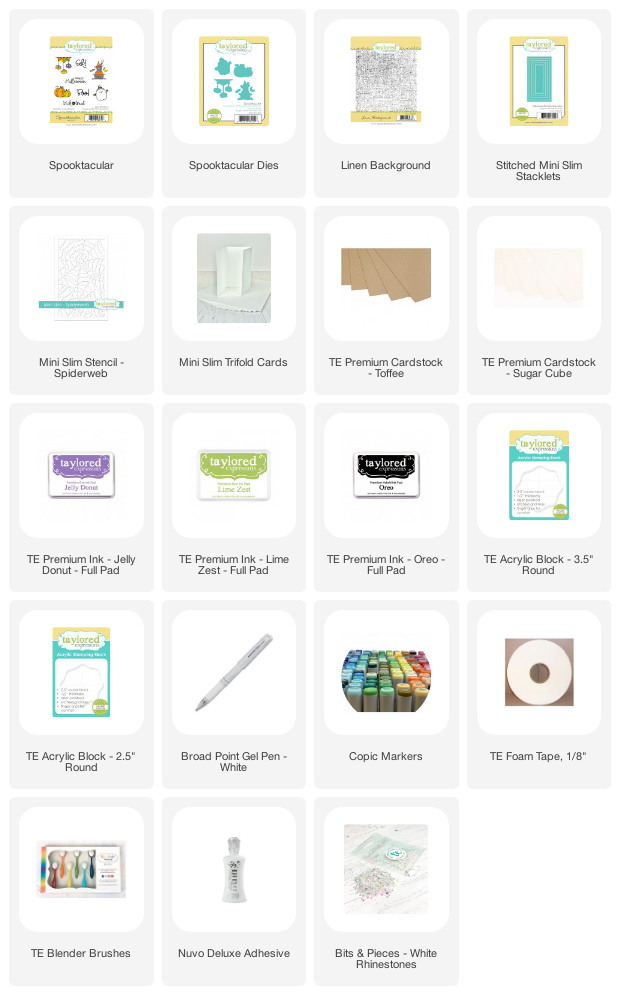 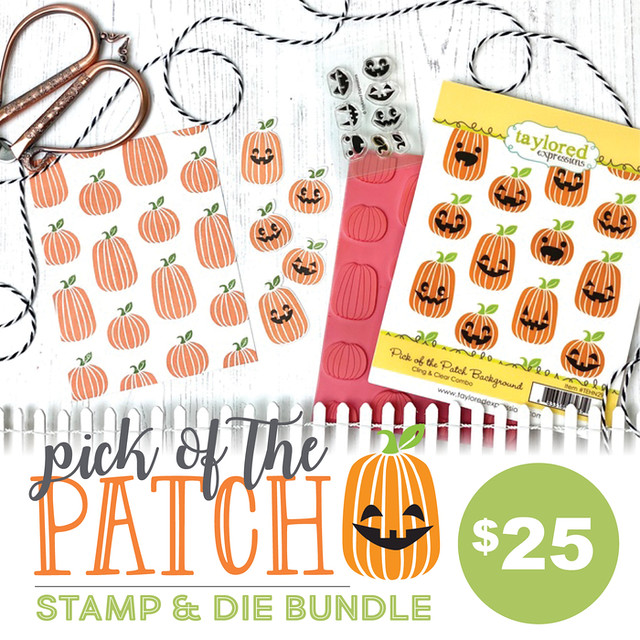 This wonderful Pick of the Patch background stamp, clear stamp and die combo is only $25. This deal last only till Sunday 30th August. I think this is a great deal. Check it out.

Also check out Taylored Expressions Blog for more details and inspirations from rest of the designers. All the new products in the release are now available for purchase at TE store.

Thanks so much for visit my blog today. Hope my projects inspired you. Until next time… take care.