Simon Says Stamp’s DieCember is one of my favourite event on my calendar for the year. I look forward to the gorgeous dies Simon releases. I am so excited like a kid in the candy shop with the dies this year. I could not wait to play with them and share my creations.

This is day #2 of the hop. The first hop was on the first of DeCember when the dies were released. You should have arrived here from the talented designer Anna-Karin Evaldsson’s blog. Don’t worry, if this is your first stop. I will list all the designers participating in the hop later in the post.

I have two projects to share today. Both are holiday cards. The first card uses the new Holiday Knit Border die.

I used this die not as a border but die cut repeatedly to cover the entire panel like a cutting plate. I didn’t realise there was a cutting plate released as well when I made it. Nevertheless, I love the versatility of this border die.

For the background, I used distress inks to add colour. I masked and sponged Barn Door, Abandoned Coral, Mowed Lawn and Twisted Citron. All of which is traditional Christmas colours. I then adhered the Holiday Knit die cut panel on top to reveal the colours through the knit die cuts. I adhered this panel on card base made of Ivory cardstock using craft foam.

For the sentiment, I used Simon’s Merry Christmas die. This is an older die from Simon. I die cut this die three times with white cardstock and once using Simon’s gold glittery cardstock. I stacked and glued with the gold glitter die cut on top.  I adhered this stacked sentiment on a vellum panel and adhered on top of the card front.

To finish the card, I added few gold sequins with gold stickles inside the sequins. Here are some closeups of the card.

The second card showcases the new Picture Book Pup die along with the Nested Banner dies. I love picture book dies and I love puppies. So this one especially with the Santa hat is adorable. I made a wobbler card using it.

I die cut the Picture Book Pup image using Neenah Solar White 110 lbs cardstock as well as Simon’s silver glitter and Crimson glitter cardstocks. To adhered the pieces together, I first embossed the image on a white cardstock and trimmed the outline. The embossing makes it easy to piece the die pieces in its place.With so many tiny pieces, this trick works like a charm. I coloured the ears and eye patch using C8, C6 and C4 grey copic markers and eyes using E25 copic marker.

On the red card base, I used an old Christmas pattern paper to cover the entire card front. This pattern paper is from a Kaisercraft Christmas pattern paper pack. The I used the second largest stitched circle die from Simon’s Stitched Circle die set to die cut a white rectangle panel trimmed to 4’x5.25′ I adhered this panel to the card front using foam adhesives. Then used a wobbler on the back of the Picture Book Pup to adhere inside the circle. The sentiment layer is adhered below the circle. No embellishment needed as it is already an interactive card. You can see the wobbler action below. 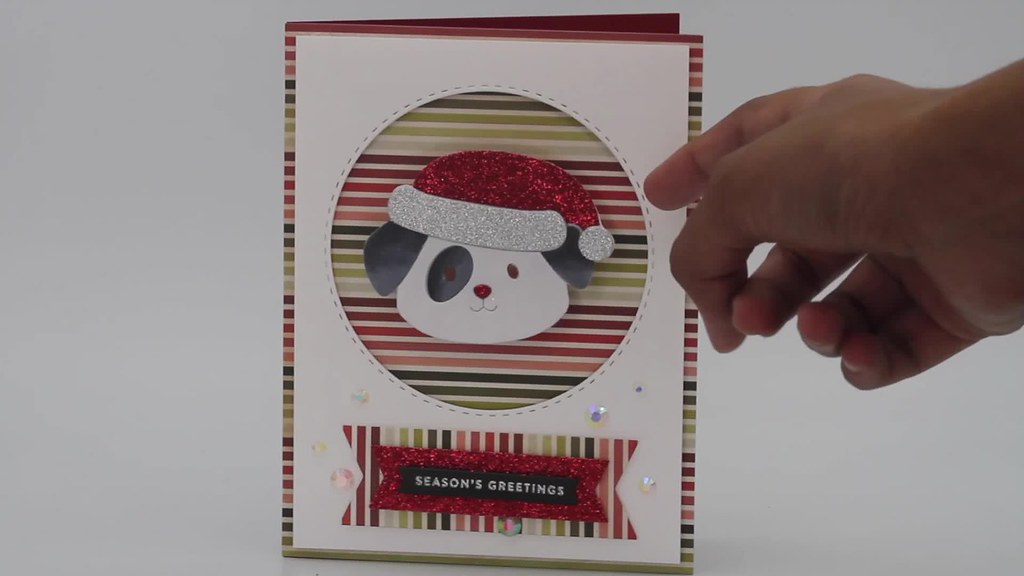 Here are some closeups of the cards

My daughter took this  card immediately after I made it and given away to her friend already. I had to quickly take photos first before she took it. Anything dog related walk out of my craft room faster than any other card I make. It is either taken by family members or friends. This card was no exception. 🙂 All the supplies used to make this card are listed below.

All the new DieCember release dies are available at Simon Says Store. Simon is also celebrating the DieCember release with $25 coupon to every stop on the hop from your blog comment section. We’ll choose your winners over the weekend and post on our Simon Says Stamp store blog on Wednesday, the 12th of December.

There is also a special promotion with the release. See details below. The promotion is valid until 12/9 at 11.59PM ET or while supplies last.

Here is the list of all the designers participating in the blog hop.

Hope you enjoyed my projects and got inspired. You next stop is to the gorgeous Elena Salo’s Blog.

Enjoy your hop and have a lovely weekend.

I love my fluff but mum thinks I need a hair cut!

You Lift me up! New card on my blog using @simonsa

Who says heart shaped images should be used only f

Good Morning! Are you ready for Easter? @taylored